Proof of full COVID-19 vaccination or recent negative COVID-19 test (within 72 hours) required for entry to the library.

Mandatory Masking policy in effect at all public library locations. Please wear your mask at all times while inside the library.

John Marcel Cuelenaere was born in 1910 to Belgian immigrant parents.  John and his three siblings grew up in Duck Lake and Leask, Saskatchewan and were known to be active and friendly children.  When John was eleven, his leg was crushed in a threshing machine accident which left him confined to hospital beds for many months.  During his recovery, John became an avid reader – a characteristic which remained with him for the rest of his life.

John studied law at the University of Saskatchewan and worked as a lawyer in Prince Albert under Diefenbaker.   He served as Minister of Natural Resources for the Province of Saskatchewan, as M.L.A for Shellbrook from 1964-1967 and as mayor of Prince Albert from 1946-1954 and 1961-1962.

Always an outspoken advocate for reading, literacy and libraries in the community, John bequeathed one third of his estate towards a much-needed new library building in 1967.  The Prince Albert Public Library was named in John Cuelenaere’s honour at the 125 12 Street opening in 1974. 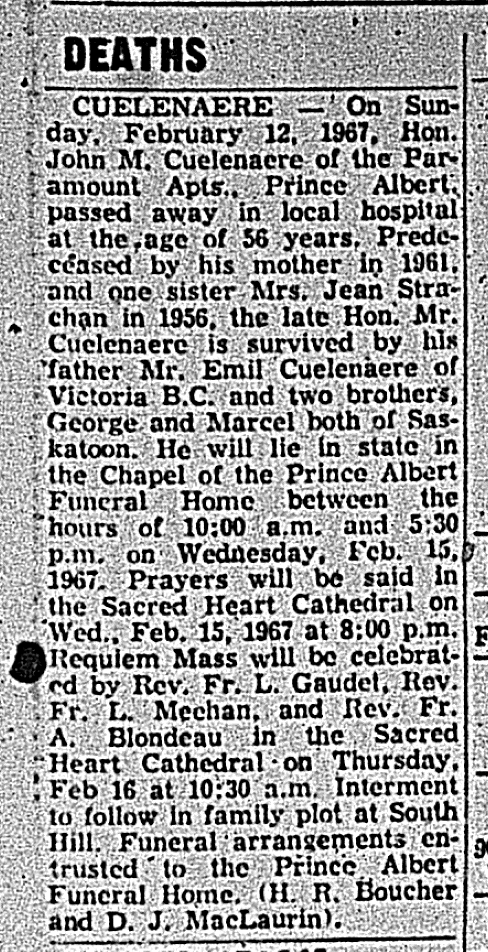